ROAD UPDATE: The corner of 2300 West (Saratoga Road) and 145 North was closed from 11/13 through 11/20 for preliminary work in preparation for sewer improvements, essential in proactively benefiting the utility system in the City of Saratoga Springs. This was done to allow the road to be open for the Thanksgiving holiday. Work will resume with a full road closure, starting December 2 and run through December 24, so the road can reopen to traffic in anticipation of the Christmas holiday. For updates, please follow Facebook and our road construction page on the City website at www…

Find out more about what is going on with UDOT road construction projects here in Saratoga Springs. Follow links for more details and contact information.

The Utah Department of Transportation (UDOT) is improving Redwood Road south of Pioneer Crossing in Saratoga Springs to reduce congestion and extend the life of the roadway. Construction began summer 2017 and is anticipated to be complete by late 2018.

COMPLETED- As part of the the Redwood Road Construction Utah Department of Transportation (UDOT) is adding an east-west Continuous Flow Intersection (CFI) at Pioneer Crossing and Redwood Road.

For questions about safely using or driving near the green bike boxes and bike lanes, visit UDOT's website here.

The Utah Department of Transportation recently conducted a safety study to identify potential solutions to improve safety on Pioneer Crossing through Lehi and Saratoga Springs. UDOT met with both cities to review and discuss the study recommendations. From the study UDOT recommended to implement the following:

"Pioneer Crossing is one of the main east-west corridors serving the communities of Saratoga Springs and Lehi. By working closely with our city partners we were able to identify solutions that would improve safety and keep traffic moving on Pioneer Crossing," said Rob Clayton, UDOT Region Three Director.

COMPLETED- Mountain View Corridor is using a phased construction approach designed to balance transportation needs with available funds. Initial construction includes two lanes in each direction with signalized intersections and biking and walking trails. Future construction phases will build out the remainder of the corridor by converting intersections to interchanges and adding inside lanes to achieve a fully functional freeway. Mountain View Corridor will eventually be a 35-mile freeway from I-80 in Salt Lake County to S.R. 73 in Utah County. 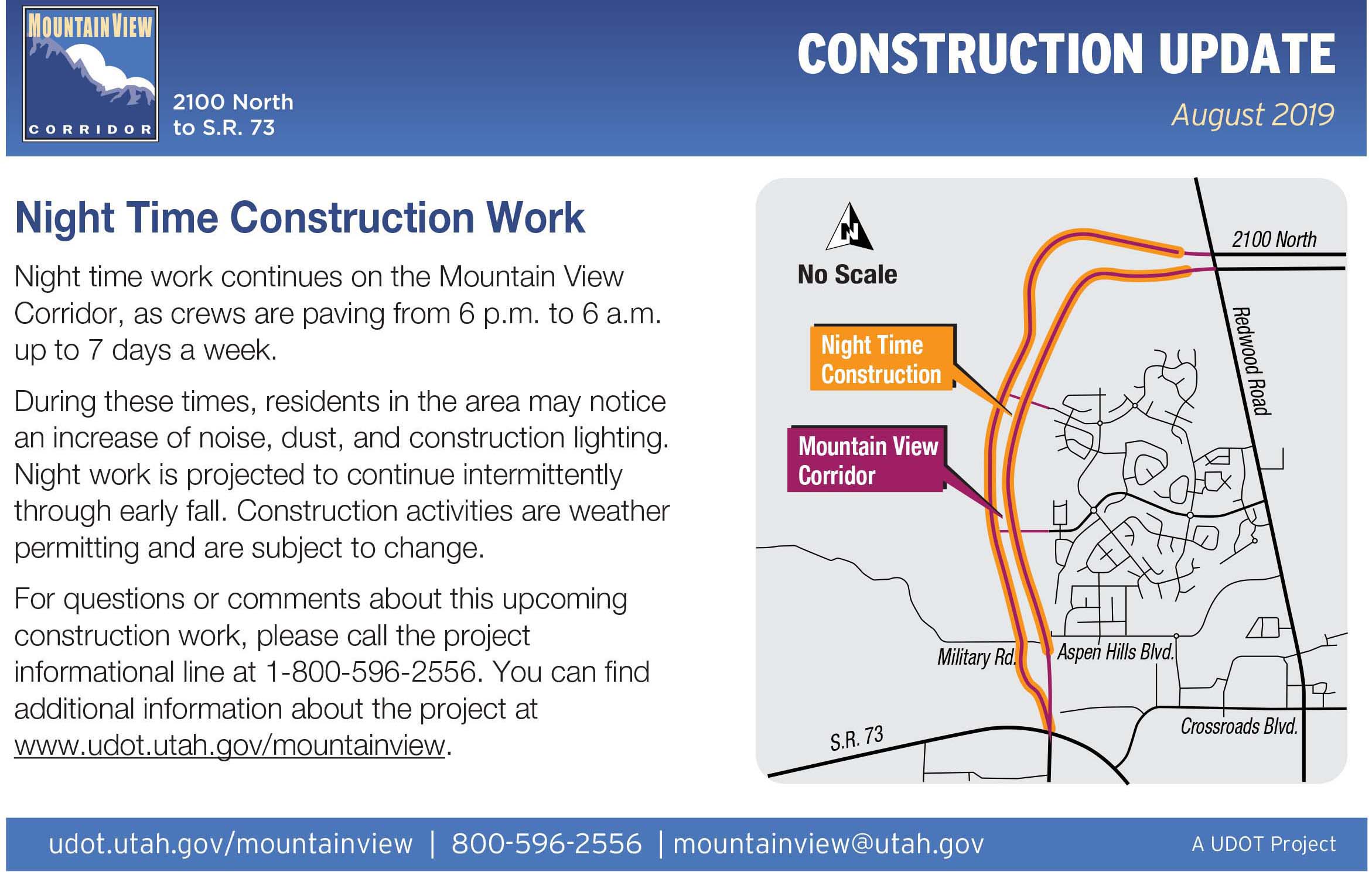 Please stay out of the work area. It is still an active construction site with crews operating large and heavy equipment that have several blind spots and the operator may not see you.

Work on the intersection is progressing. A traffic switch on Redwood Road is projected to start as soon as the evening of August 28. However, motorist should expect intermittent lane closure as construction continues in the area including connecting the intersection to the corridor.

The entire project is anticipated to open early fall 2019.

For more information, you can go to: www.udot.utah.gov/mountainview/, or you can contact the Mountain View Corridor team at 1-800-596-2556 or at mountainview@utah.gov.

The Utah Department of Transportation (UDOT) has major traffic changes coming to Lehi in early November. The new bridge over I-15 at Triumph Boulevard is expected to open and the frontage roads adjacent to I-15 from S.R. 92 (Timpanogos Highway) to 2100 North will convert to one-way roads. Both of these new features will be open to traffic, but in a temporary configuration through late 2020. 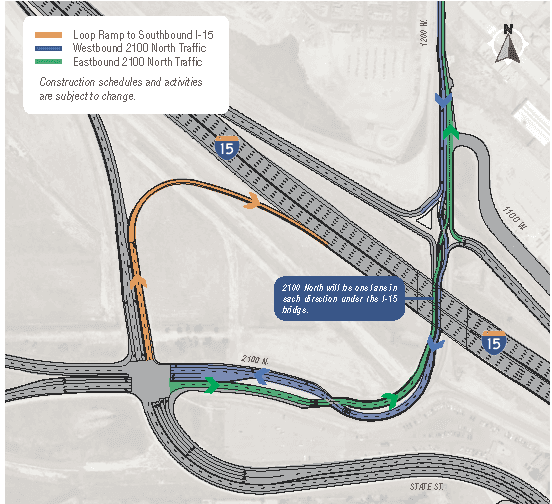 Once Triumph Boulevard bridge is open, 2100 North will be reduced to one lane in each direction at I-15. To keep traffic moving while crews work on the interchange, it will be converted to a temporary Diverging Diamond Interchange (DDI) during construction. Drivers should plan ahead for additional delays on 2100 North during a.m. and p.m. commutes or use an alternate route. 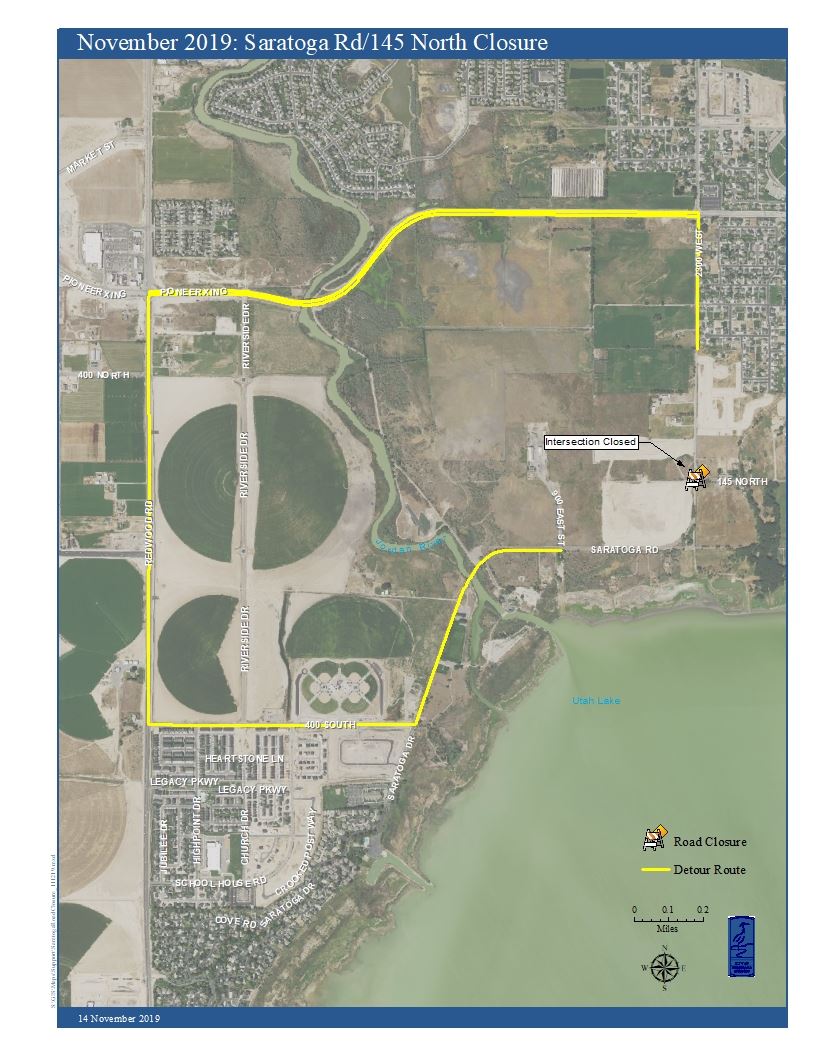 The corner of 2300 West (Saratoga Road) and 145 North was closed from 11/13 through 11/20 for preliminary work in preparation for sewer improvements, essential in proactively benefiting the utility system in the City of Saratoga Springs. This was done to allow the road to be open for the Thanksgiving holiday. Work will resume with a full road closure, starting December 2 and run through December 24, so the road can reopen to traffic in anticipation of the Christmas holiday.

The road closure on Saratoga Road is part of necessary utility improvement that has been in the planning phase since 2014. The timing of the project is due to negotiations with neighboring cities, the sewer district and budgeted funding, as well as an effort not to add further to the congestion during the Redwood Road widening project last year.

The City's preference is always to leave an available lane open to traffic, if possible. City staff looked at the possibility of leaving one lane open during this project, but due to the size and scope of the project it was not feasible to leave open lanes for traffic. As such we have to close Saratoga Road during this three-week period to complete the project in a timely manner.

Find out more about what is going on with city road construction projects here in Saratoga Springs.  Send comments and questions to comments@saratogaspringscity.com